Zaku, Zaku what will grow out of you. I’m building you for a week now.
And I want to tell you, my dear readers, that I’m very pleased with the final effect.
This model kit is almost flawless, as you will see in the following review. 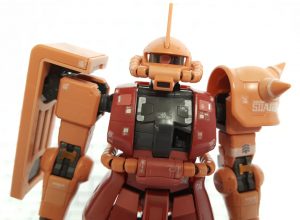 It took me a long time to build this kit. And took even longer to write this review.
I could put the blame on the fact that for two months I was on the road a lot.
I had some free and calm days on which I could tinker with the Zaku and write a part of this text.  Apperently I’m a bigger slacker than I thought, because I finished the build on 2nd of September and now we have October…

MS-06 Zaku II Commander Type is a variant of the fundamental combat machine that was used by ZEON forces during The One Year War of 0079 UC from the tv show Mobile Suit Gundam (1979). The differences between the standard type and Comander Typy at first glance are barely noticable. Visually the difference is in the antenna on the head for better communication and some thrusters on the legs. The main difference between the two types of Zaku’s are the custom colors that the pilot chooses and the units performance. The latter created the inside joke: red makes it three times faster. Also Char’s nickname The Red Comet came from the fact that he pilots a red Zaku.
And the red Commander Type Zaku II is the object of today’s review. 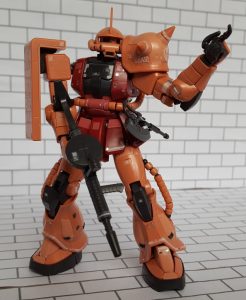 Standard armaments that comes with the MS-06 is a machinegun that uses conventional ammuniton, which makes it less to none effective against newer types of armor. For close combat use Zaku’s are equppied with a Heat Hawk – a tomahawk style axe with a cutting edge that heats up to very high temperatures. Other equipment developed for this machine is a bazooka and a shield mounted on the right shoulder of the unit. I’ve mentioned only those weapons that were included in the model kit. When the conflict between Zeon and The Federation came to its final stages, when RX-78-2 showed on the battlefield, the sad truth came out. That Zaku II is an outdated model. But in the hands of skilled pilots like Char or Johnny Ridden it still did some heavy damage to the oposing forces.

I’ve never been a fan of this design. When I first saw it in it’s basic green version I thought that it’s ugly. From when I can remember I prefer my robots with edges 😉 Zaku’s different – it has curves 😉 But I couldn’t belive how good was the process of building this kit and how the final effect looked good.
In my opinion it’s a very solid kit in this line. I would put it in the same line as RG Exia as an example of a good Real Grade. And I base it from expirience because I’ve built 4 RG models. 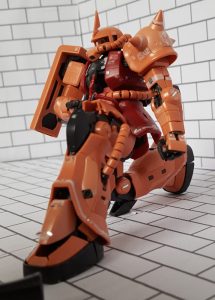 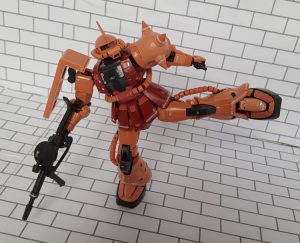 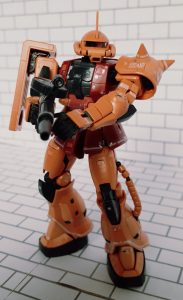 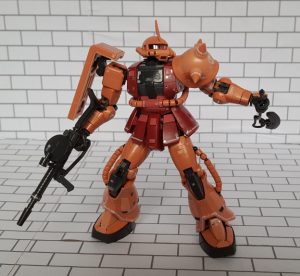 I am delighted. Real Grade does not dissapoint in the topics of color separation and the general quality of the model kit. Yes, we have here a lot of small parts that are difficult to handle but are very easy to lose and disappear on the floor 😉 The pictures show how vast is the posability of the Zaku. The designers at Bandai took an ugly thing and remade it with realism. This realism made me look in another way on Zaku. MS-06S suprised me beacuse it’s the first RG model that has panel lines that deserve to be filled with paint, to get the anime accuracy effect. Stickers – and there was a lot of them – gave the effect that You are holding a miniaturized combat machine that served a lot of years on the frontline. 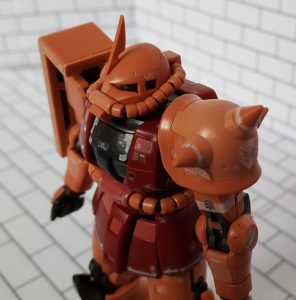 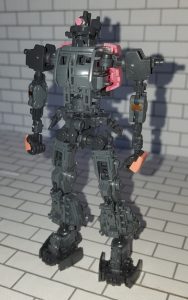 A few words about the content of the box. After you open the box you will see bags containing 9 runners, a sheet of stickers, a small bag with two tubes and a manual for assembling the kit. The manual is in japanese, but the graphics are simple and show step-by-step which part do you need to take. The manual also has some great arts showing the maintanance of a Zaku, some photos of the finished kit and a photo of a painted Char figurine. 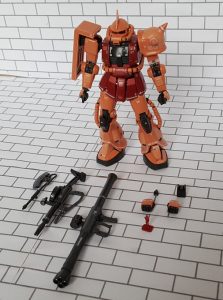 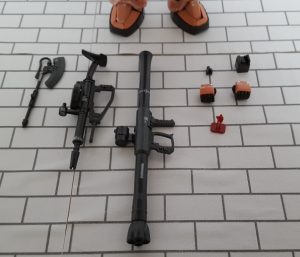 When You’ll decide that the work is done, You’ll get a model in the 1/144 scale, two sets of hands (fists and RG Hands), Char Aznable figurine, a machinegun, bazooka, the Heat Hawk and a small weapon holder (which You can mount in one of three places on the skirt section) and an action base adapter.

I had a lot of luck with this one. I didn’t lose or brake any part. Even those „beads” that make the energy pipes/cables on the legs, torso and head weren’t a problem. Making those lines was actually quite simple and fun. The biggest problem of this model were the stickers. The final efect is very nice, but every time I want to change the pose or take some dust of it I need to reapply them every time. Maybe the glue is weak (this set has it’s years an who knows how long did it lay on a store shelf and waited to come to me 😉 ) or I had dirty hand when I was working on it and put grease on the glue.
I also had a small problem with Zaku’s the right leg. After dissasembly, diagnostics and reassembly I think that now everything works fine. It will live 😉 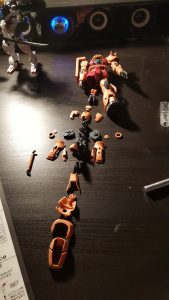 To wrap things up. MS-06S Zaku II is a solid Real Grade kit. Not many pieces fall off. The many ways you can pose it is awesome and the build took me 48 hours. I kept my standard time for this type of model kit. Zaku II is an example how an ugly duckling can grow into a nice swan 😉 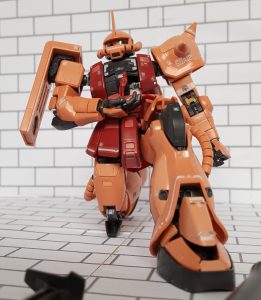 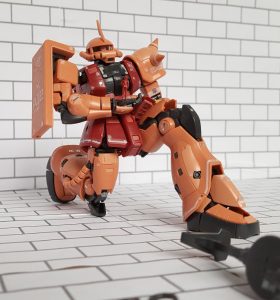 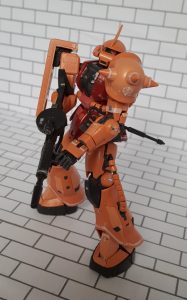 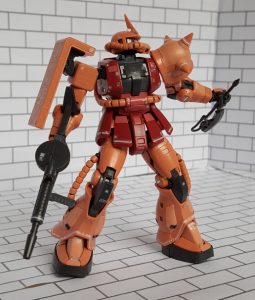 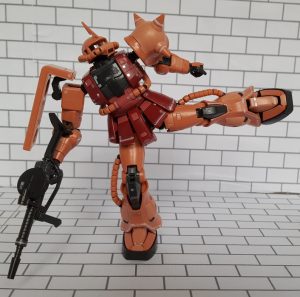